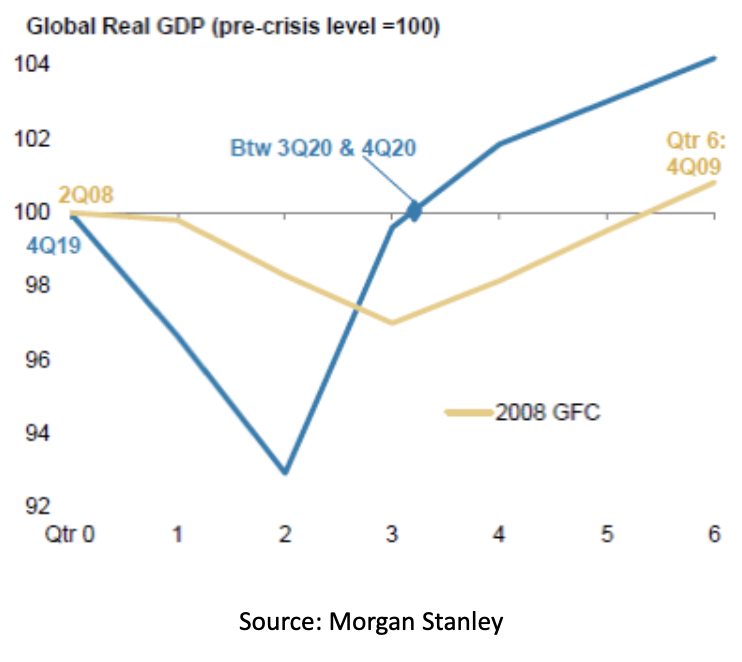 Equity market returns are tightly tied to the economy. After all, companies largely represent the economy by means of providing jobs, producing goods for consumers and government, and buying the goods of other companies.  If one has a good sense of how the economy will do, she can often accurately forecast the future returns of stocks. In this note, we review how the economy is doing and how it is expected to do based on COVID-19 and political activities, including the US election.

So how is the economy doing?

On a global economic basis, we have thus far experienced a V-shaped recovery; we returned to a growing economy in just half the time for which it took during the global financial crisis (GFC) of 2008.

Now that the economy is growing again, we are expected to return to our pre-pandemic level economy by 4th quarter 2021. Consistent with this, the 3rd quarter US GDP surprised economists to the upside by coming in at a 33.1% (annualized) growth rate (versus a consensus view of 32%).

Crucially, this sharp recovery has been driven by both massive government stimulus (monetary and fiscal) and some abating of COVID cases.

What’s happening with COVID-19 and how will this impact the economy?

Concerning the former issue, global consumer spending has been surprisingly stable in the face of rising cases, though it is still down about 30% in the US versus pre-crisis levels.

Nonetheless, fresh lockdowns in Europe and across portions of the US threaten to reverse this economic progress. Thus far, there has been a swift recovery in consumption after lockdowns, especially in the US. However, this has been supported largely by fiscal stimulus. The below chart illustrates how US fiscal stimulus not only replaced lost wage income, but for many, provided excess income. Other data show much of this excess income was saved, creating a cushion as government support ran dry, enabling current stable spending beyond the stimulus period.

Unfortunately, it seems this surplus may now be running out. Meanwhile, Congress has been unable to agree on any additional stimulus. If stimulus is not passed until the New Year, this could generate fresh problems for the economy, in my view, echoing Fed Chair Powell’s view. Nonetheless, I still see a most-likely scenario where stimulus is passed before the end of the year. The driver of this outcome is likely the upcoming election.

What is going to happen with the election and what are its economic consequences?

Current betting markets suggest the possibility of a Blue Wave (i.e., post-election Democrats having control of both chambers of Congress and the presidency). The second most likely case is a Blue Tide (i.e., post-election Congress is split with Republican control of the Senate and Democratic control of the presidency).  The below chart shows the implied probability of betting markets across time in predicting each part of these outcomes.

Should Biden be elected, the likely consequences of his economic plan are bitter-sweet. He has suggested a large stimulus plan is in order, which would help the economy, but also that a large tax increase is in store, which would put breaks on the economy. The hope would be not to implement tax increases until after stimulus has worked its way through the economy, though most recently on the campaign trail, there was a suggestion of an immediate tax increase. Nonetheless, history suggests politicians do not generally accomplish as much as they promise. Further, presidents can do little without Congress passing legislation. And even if Democrats control both chambers of Congress, the margin of victory is likely to be small, which means policymaking will be constrained by moderate Democrats.

The below chart calculates the expected net (i.e., the black diamond) annual economic impact of Biden policies on the earnings of the largest 500 US companies (and thus the impact on much of the economy and stock market). We consider the anticipated effects of both the policy proposed on the campaign trail and the policy that is actually likely to be implemented. On net, with more modest tax increases, which is the expected actual policy to be implemented under a Biden-win, the economy could have a net gain after four years. Again, crucially this assumes a later-timed tax increase that promised.

Under which configuration of the US government does the US stock market have the highest returns?

It must be stressed that these data are not a large sample, so they must be taken with a grain of salt. With this similar caveat, the below graph reports the return of US stocks since 1929 across many presidential administrations. This chart, I believe, helps provide a broad perspective on the whole matter of concern over the impact of a President on the stock market. The short of it is that the President has less impact on markets than Congress.

An additional crucial factor in terms of an economic recovery, in my view, is the possibility of vaccines and therapeutics.

When are we likely to have a Vaccine?

The below chart reports when experts believe we will have enough vaccine to inoculate 25 million Americans, and how beliefs have changed over time.

Almost half of these forecasters currently expect a vaccine to be available at scale by Q1 2021, and almost 90% expect we will have it by Q2 2021, at the latest.  Furthermore, they have increasingly seen a vaccine as coming sooner rather than later. Some estimates by Goldman Sachs suggest as many as 3.5 billion doses will be available in 2021. Meanwhile, there are also myriad therapeutics being developed. Gilead’s Remdesivir is a modestly effective therapeutic with recent FDA approval. Molecular Partners and others are working on some exciting therapeutics, as well, some in late stages.

If, as consensus suggests, we will have meaningful therapeutics and vaccines by the middle of this next year, I believe that we need to bridge the gap between here and there via economic stimulus, should we want to avoid an economic downturn. The FED has provided extraordinary monetary stimulus, showing it’s quite serious about its “do whatever it takes” mantra. Congress has initially followed suit with its early series of large fiscal stimulus programs. However, Congress has now faltered in regard to passing additional stimulus. In my view, I think the most likely outcome is that after the distraction of the election, politicians will again acutely feel the pressure to take care of their constituents and work across both isles to thwart economic calamity via additional fiscal stimulus. All the while, the rest of the world has also been providing significant fiscal and monetary stimulus.

So what is Omega doing?

At Omega, we continue to hedge outcomes through owning different kinds of investments that fare differently based on different economic outcomes. We have been aggressively managing taxes and allocations, as appropriate. We have also begun adding some reflationary exposure, as upon a full economic recovery financed through stimulus and debt, reflation is a likely state of the world. We are also exploring additional private investments to take advantage of more attractive risk/return dynamics that can be obtained by using more sophisticated investments. In addition, once a second stimulus and possible tax law is passed, we will be “first-to-market” to see where we can help you best position for the changes. Whether we have a Blue Wave, Blue Tide, or Thin Red Line (or some other permutation), we are busy helping manage to the outcomes. Meanwhile, as always, if you have any questions, please do not hesitate to reach out to us.