Looking back at 2015 from the close of the year, it doesn’t seem like much happened last year: many investments had close to a zero return. Some bonds were a bit above zero and many stocks were below zero, pushing a typical global portfolio to a modest lost. However, this level ending masks a volatile year that became even more volatile into the New Year. Indeed, year to date (through 1/20), stocks were down typically 8-12%. Bonds were flat to down. There was one bright spot: managed futures were up over 5%. Over the past 20 years for which we’ve used managed futures, they have consistently fared well during the most volatile markets, which is we why use them in our States of the World Wealth Managementtm process: for those states of the world with high volatility.

It turns out that years with a lot of volatility are actually normal years. Since 1980, the US stock market, as measured by the S&P 500, experienced intra-year declines every year at an average rate of 14%. That is, markets go down, on average, 14% at some point in time, every single year. So although returns have averaged close to 10% annually in the long-run, each year we need to be willing to ride through some significant peaks and valleys to get there (see chart at the end of the article). My sense is that in the “olden days,” people were not as regularly inundated with news of the short-term gyrations of the financial markets and thus didn’t as often notice the volatility. However, today it’s daily news, if not alerts sent to our Smartphones. This increased frequency of reporting makes markets feel relatively more volatile than they were years ago.

Nevertheless, it’s natural to ask, why have most markets already fallen so much this year? Many times, if we are honest, we do not know why markets fall (or go up) over a short period of time. There are usually events that the media can readily point to, for which get the blame—sometimes rightly and sometimes wrongly. However, sometimes there is no clear news; for these days, the media usually say the market went down simply because traders were taking profits. This year, there have been two topics relentlessly reported on for which market movements are repeatedly linked to: oil and China.

Now the twin concerns of the price of oil and China’s economy are driven by the perception that their weakness is a harbinger of a failing US economy. For perspective, first consider that not even the US’s own stock market is a reliable predictor of the health of the US economy: economist Paul Samuelson famously quipped: “The stock market has called nine of the last five recessions.” To understand why this is so, we can first note that the stock market does not accurately represent the overall US economy. For example, the stock market does not directly include government spending per se, which represents close to a 20% share of the overall economy. As another example, the composition of firms in the stock market do not represent the same composition in the economy. Second, although companies may currently be facing headwinds, workers’ wages have been improving, both in terms of overall employment and wage levels. Consumer spending represents the largest share of the US economy at almost 70%. Finally, although the largest US firms enjoy significant overseas sales, the overall US economy is comprised of a bit more than 10% of exports.

Concerning the price of oil, I gave a lecture for clients a little over a year ago that discussed how reduced oil prices can actually help the US and global economy on whole. In fact, an economist rule of thumb is that a 10% fall in oil prices boosts economic growth from .1% to .5%. To be sure, some sectors can suffer tremendously, but overall reduced oil costs are often helpful for the economy. The current short term drop in the stock market when oil falls in price is driven largely over the concern that a drop in the price of oil reflects a failing economy. That is, that the stock market fall is driven by a concern over soft demand. However, in my view, soft oil prices have been driven more by supply factors: the US fracking boom and overall global production. Since the end of 1984, we have enjoyed four drops in the price of oil of over 50%. For the one year following such a drop, the S&P 500 always had a positive return of at least 16%, averaging a whopping 24% gain. However, as always past performance is not necessarily indicative of future performance. Further, my most likely scenario for US equities this next year is for modest to flat returns. Nonetheless, it is not the case that a large fall in the price of oil necessarily spells doom for financial markets. In fact, at least historically, it means just the opposite. If low prices continue, however, clearly this will prove very difficult for some nations. For those interested, here is more extensive article on the issue.

Finally, there is China. When I personally visited China almost three years ago I was impressed by my conversations with their Federal Reserve officials, other top government officials, and CEOs in terms of their apparent willingness to implement important economic and political changes that would enable China to create long-term sustainable growth. However, since then, there have been some disappointments in my view in their half-hearted attempts at reform. As such, we are reducing our exposure to China. In terms of China being responsible for the future success of the US economy and stock market, there should be less concern. According to the US Census Bureau, in 2015 we sold roughly $106 million worth of goods to China but we bought over $443 of goods from them. In short, China needs us economically much more than we need them. At some $18 trillion of overall economic output in the US, China’s $106 million purchase of our goods rounds off to zero. Of course, China can have a second order effect on other countries that purchase from us. However, on whole it is a minor economic exposure, in my view. Here is an article that delves into China’s more serious problems.

So in sum, my position is that we are again witnessing short term market volatility that is being driven by factors that are not likely to pose a long term risk to the well-being of the US economy. This does not mean short term volatility will not continue. However, it does mean the long term outlook is still promising. It suggests that those creating portfolios with exposure to different states of the world, can still be well positioned to take advantage of opportunities without entirely exposing oneself to the negative trends.

In the meantime, if you have any questions or concerns, please write or call. And I again wish you all a healthy and happy New Year! 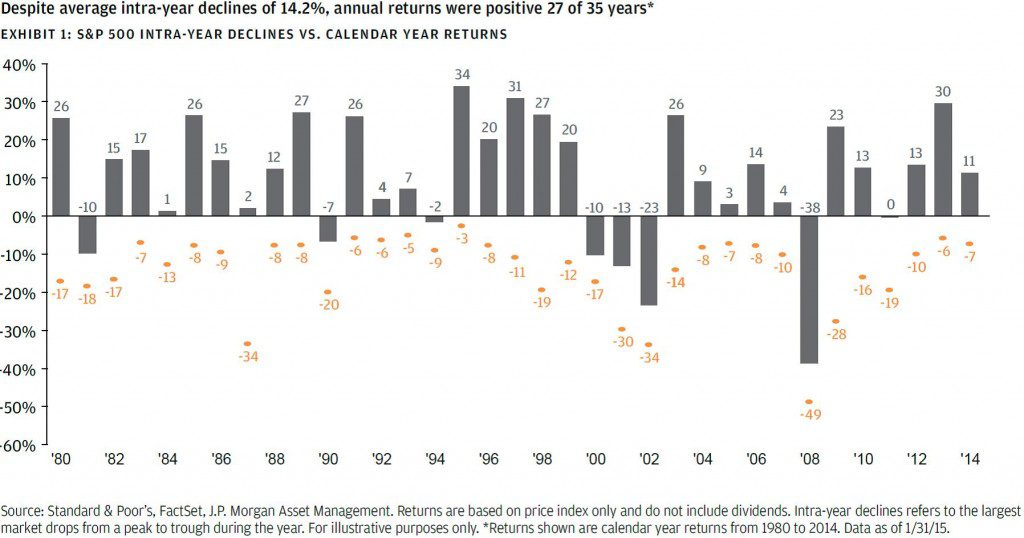